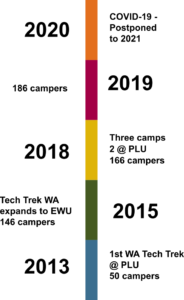 Tech Trek began in California at Stanford University in 1998, powered by an AAUW community grant. Over the next 15 years, AAUW of California added camps in 10 locations. The national organization of AAUW took the program nationwide in 2013 and it has been offered in 10 states.

AAUW of Washington was one of the first states to adopt the California model and be supported by a grant from AAUW national. The first camp was in 2013 at Pacific Lutheran University in Tacoma with 50 girls and expanded to a second location– Eastern Washington University in Cheney–in 2015. Since 2013, nearly 1000 girls have participated in this one-week residential camp for rising 8th graders in science technology, engineering, and math.